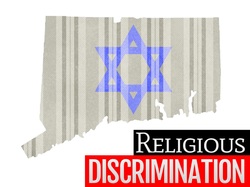 Litchfield, CT – A synagogue (Chabad Lubavitch) purchased a two story “stick style” Victorian building constructed in the late 1870s to use as a place of worship. They intended to use the structure to serve the needs of the community; host prayer, religious ceremonies, religious education; provide living quarters for the Rabbi and his family, and a guest apartment.

Chabad Lubavitch is an orthodox Hasidic congregation serving the people of greater Litchfield County, Connecticut. In the decades preceding the purchase of the property, the building’s original architectural style had been lost, changed, or gutted numerous times. Indeed, in 1971 the property was rezoned from residential to commercial use. Through the years it had been used as an antique shop with multiple vendors, a fabric store, and, most recently, the Wilderness Shop (a retail outfitter’s store). Because no adequate documentation remains as to its original appearance, it would be virtually impossible for the synagogue to restore the building to its historic form. As such, the congregation filed an application with the Historic District Commission of the Borough of Litchfield to modify the property to meet the synagogue’s religious needs. The commission denied the synagogue’s application.

The synagogue filed suit based on federal law designed to protect religious institutions. The Religious Land Use and Institutionalized Persons Act (RLUIPA) was enacted in 2000 in response to the unequal and often hostile treatment that religious institutions receive at the hands of local governments. RLUIPA requires that when a religious assembly’s practice of faith is substantially burdened by a land use decision, the government is held to the highest legal standard, having to demonstrate a “compelling interest.” Chabad Lubavitch lost in the lower court and subsequently filed an appeal to the U.S. Court of Appeals for the Second Circuit. Based on its expertise in RLUIPA litigation, the Pacific Justice Institute filed a friend of the court brief in support of the synagogue.

“Unfortunately this situation is not unusual. Whatever a congregation proposes, it is never good enough for local officials, who often counter with unreasonable and impossible demands,” said Brad Dacus, president of PJI. “We are committed to helping religious institutions receive the protections provided under the law,” Dacus continued.