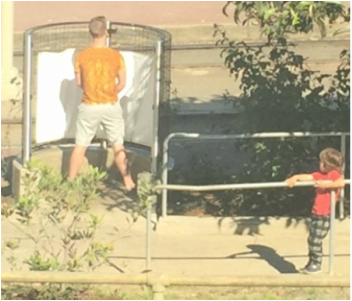 PJI first reported on February 4 that San Francisco had constructed a semi-circular structure, known as a pissoir, at the corner of Dolores Park.  The wall is about 4 feet high and is completely open at the back, with no roof or doors.  Men using the hole in the ground are visible to children playing in the park, passersby on the adjacent street, sidewalk and light rail, and to residents overlooking the park. ​

PJI represents local disgusted residents, as well as the San Francisco Chinese Christian Union, whose members include women and the disabled who are not able to safely use a pissoir.

PJI sent a demand letter to the City and County of San Francisco more than two months ago, identifying numerous legal problems with the pissoir.  In response, San Francisco offered no substantive rebuttal but disclosed documents confirming that it spent at least $15,000 on the pissoir.

Brad Dacus, president of Pacific Justice Institute, commented, “San Francisco’s use of tax dollars to promote public urination is not only disgusting; it is also blatantly illegal.  Officials would not and could not allow such a facility to be constructed by private businesses or residents, because it so obviously violates disability access and basic health and safety laws, to name a few.  These officials are not above the law.”

PJI is being assisted in this case by Seattle attorney Conrad Reynoldson, of Washington Civil & Disability Advocate, which is focused on protecting both disability rights and civil rights more broadly.